At the end of a tightly played 1st period, the Stars finally broke through on a penalty shot goal by James Nicolaidis with two seconds remaining in the period. The Gulls evened it up in the 2nd but not for long as the Stars were able to pull ahead again as Sam Silver cashed in a rebound on a Matthew Almeida shot from the point. Michael Agafonov padded the lead with a laser that made it through the goalie's legs with a few minutes left in the period. It stayed that way until the 3rd due in part to the stellar goaltending of Alex Gargano who was called on to make some key saves and CJ Diagostino who played a strong 2 way game. A few minutes into the 3rd, James Lamantia raced down the wing and unleashed a shot that found it's way into the net for a 4-1 Stars advantage. The Gulls were able to cut the deficit to 2 on a breakaway goal with 7 minutes left but James Lamantia struck again off a faceoff as he broke through the defense and deposited the puck into the corner of the net. The Gulls were able again to trim the lead to 2 but that is as close as they got until the final horn sounded.

After the customary handshake, the Stars lined up to receive their medals from Coach Zack. He also presented the playoff MVP award to Chris Astorino who was recognized for his outstanding defensive performance. He was called upon time after time to shutdown the opponent's top players all the while helping to create offensive opportunities for his team. 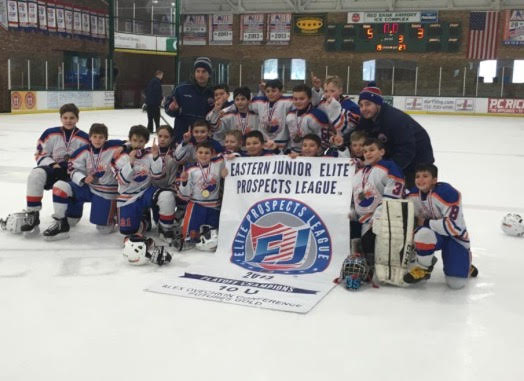