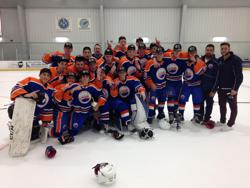 The GNY Stars Midget 16UAA and 18UAA teams both finished in 1st place in the EJEPL Split Season that concluded last week.

In 10 games the 16U team did not lose a game in regulation and earned at least one point in every contest. They have a seven game winning streak going into the playoffs while outscoring their opponents 39-10 in those games. They will take on the Western Mass Vipers in the semifinal round.

Equally impressive is the 18U squad with only one blemish on their record in 10 games, a 2-1 loss to the Maine Moose. They were dominating defensively posting 3 shutouts and only allowing 13 goals in their 10 contests. They will take on the RI Jr. Blues in the semifinal round.

Great job and good luck to both teams in the EJEPL playoffs on Oct. 28th.