HOLY COW !!! What an amazing LIAHL playoff week our 16u AA team had. It all started on March 6th with the GNY Stars hosting the L.I.Edge. After splitting the season series 1-1 and finishing one point ahead of the Edge to eliminate them from State contention they looked for revenge against us and they came out strong but if not for Mike Marino our star goal tender who stopped 34 out of 36 shots against, we would not have had the opportunity to win the game in overtime. Right after killing off 3 minutes of an Edge power play to start the OT our Captain Bobby Farr scored the game winner with the assists coming from our assistant captains Joe Lachase and Daniel Apice sending the team to the championship game on Sunday @ Dix Hills vs the Rebels.
Coming into the game the Rebels were definitely the favorites they were undefeated in the LIAHL and especially since they had the home ice advantage. But The Stars started out strong and they were not intimidated playing probably their best hockey of the year, after coming close to beating them 3-2 and a 1-1 tie in the beginning of the year it was our time for revenge, the boys couldnt wait to get a shot at them again. The momentum swung back and forth as everyone was on the edge of their seats after every shot wondering when one of these boys would let one past them and once again it was the Mike Marino show stopping all 52 shots thrown at him. It was an amazing effort by him and also the Rebel goalie must get credit because he matched Mike and denied us 36 times.
It wasnt until the second sudden death overtime on a penalty that the refs had to call with 5 minutes left that our power play begun with Lucca Vicino passing the puck from the left side of the ice in the offensive zone back to the point man Ryan Murphy who made a nice move on the blue line to create separation and giving the puck back to Vicino who walked in just below the left face off circle and unleashed a perfect screen shot between the defenders legs that the goalie never saw the puck until it was in the back of the net. WE WIN WE WIN !!

Thanks to all the parents and coaches who all helped make this a most memorable season to not be forgotten now its off to state championships in Buffalo N.Y. story to be continued....... 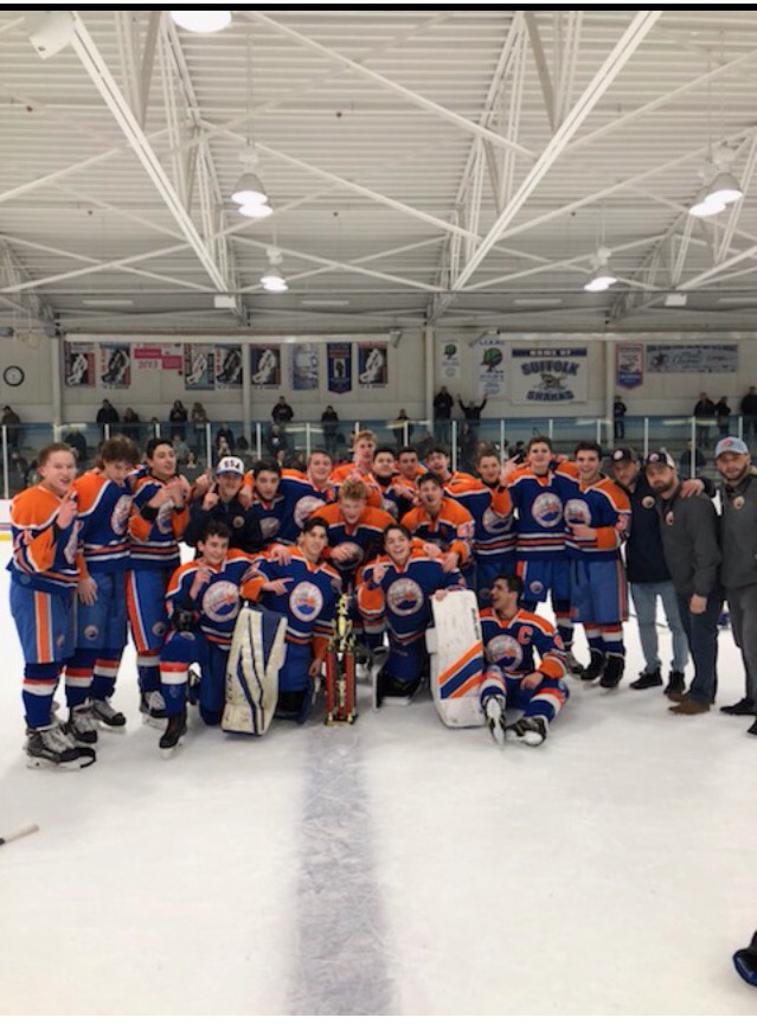