The NY Stars PWA team secured the LIAHL Tier III Championship in a hard fought 2-0 game against the PAL Sound Tigers. The Stars came in second place in the regular season which included at least one win over every opponent they faced in division play. However, they also lost to both of their playoff opponents so they knew the road would not be easy. The semifinal game was against the 3rd place Great Neck Bruins at Abe Stark and the Stars jumped out to an early 3-0 lead and never looked back as they skated to a 5-3 win.

The next and final hurdle would be a rubber match against the Sound Tigers who bested the Stars in the first game by a score of 3-1. The second game took place after the new year and the Stars came out on top in a squeaker by a score of 1-0. So due to the results of the first 2 games the anticipation was a low scoring, tightly played affair. The overflowing crowd was fired up for the boys with horns, cowbells and chants before they even took the ice. The game played out in the first as advertised as both teams didn't generate many premium scoring chances and when they did the goalies on both teams took care of business.

Eventually something had to give and give it did as 5 minutes into the 2nd period with the Stars shorthanded and the play in the Sound Tiger's zone, Joseph Ludovico took a low shot on the goalie who was unable to corral it. A generous rebound went right to Mason Hitt's stick and he tucked the puck past the goalie for a 1-0 Stars lead and an eruption of epic proportions from the stands and the player's bench. With plenty of game left, the Stars stuck to their game plan with fierce back checking and staunch defense. Halfway through the final period, the Stars gave their opponent an opening when a Sound Tiger player stole the puck and broke in all alone only to be denied by Aden Shimunov who feverishly back checked but in his denial drew a penalty resulting in a penalty shot. This was a pivotal moment to say the least and in this type of game, you had the feeling might be PAL's last chance to get things even. As the buzz died down to a whisper and with all eyes on Stars goalie Liam Conry, the opponent rushed in and fired his attempt only to be stoned by Conry. Jubilation from the Brooklyn crew and a big exhale! With that bullet dodged, the Stars went back to the methodical business of defensive pressure and counter attacking which would pay off a few minutes after the thwarted penalty shot as Mason Hitt converted another rebound in almost identical fashion as his first goal. That goal sealed their opponent's fate as a 2-0 lead with a few minutes to go felt insurmountable. And it was as that is the way the game ended with smiles, hugs and high fives by the adults and a sea of humanity on the ice by the players(and some of their PWAA cohorts who stayed to support)

Congratulations to Coaches Roman Radomiselski and Jay Ludovico for a great season and for all their hard work and effort to prepare this team for a tough playoff run and to all of the parents and players for a great season with an even better ending! 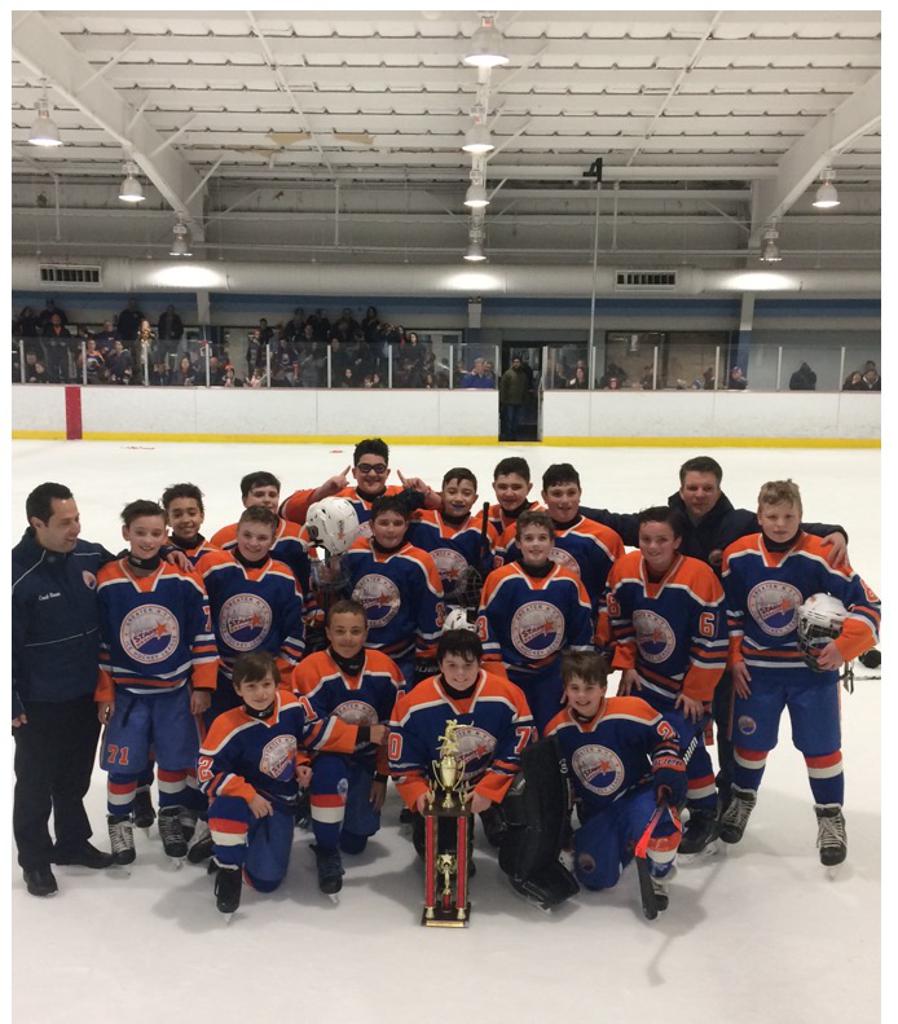